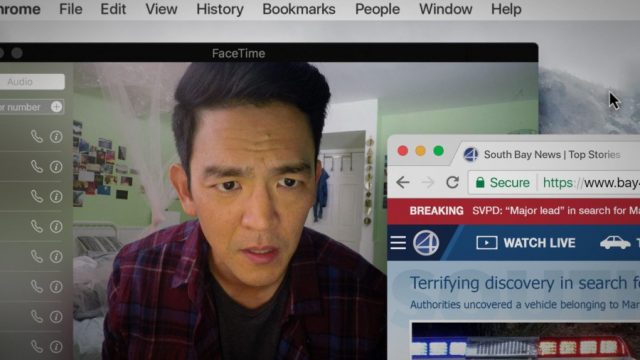 The new thriller Searching is groundbreaking in more ways than one. The film tells the story of David Kim, played by John Cho, whose daughter Margot mysteriously goes missing. Margot disappears after telling her father she was going to study after school. After a police search reveals no results, David takes matters into his own hands by going through his daughter’s laptop and social media accounts to try and track her down, and bring Margot home.

The film incorporates technology like phones and laptops to tell the story. As opposed to seeing the film through a fourth wall, as per typical films, the audience sees the action happen through Facetime calls, YouTube searches, Excel spreadsheets and CCTV footage. Director Aneesh Chaganty felt it was important to use technology as a character to tell the story, due to its relevance in today’s society.

The film is the first of its kind to use this new way of filmmaking, and it’s hoped that it will start a movement of films like this.

The irony of the story lies in the characterisation of Margot and her father.

“We tried to make this movie about how, in a world where everything is so connected, at the heart of this story is a dad and a daughter who are disconnected,” said Chaganty to NZ Herald. “In today’s world, there are a thousand different aspects and avenues on a computer that can alienate a parent from a kid or anyone from anyone else.”

The film also joins movies like Crazy Rich Asians and To All The Boys I’ve Loved Before with their representation of Asian-American families. The film reflects classic representations of Asian families, without conforming to stereotypes. Not only do we see some cultural diversity on the screen, we see the deterioration of a relationship between father and daughter, and the subsequent psychological impacts of the events that take place. We see Cho represent a heartbroken, emotionally exhausted man desperate to reconnect with his daughter. This is a type of vulnerability we need to see more of in the media and in film.

The film hit screens in Australia on September 13 so be sure to check it out!

The Witcher Season 2, What We Know So Far