Following on from yesterday’s drama of Kimye vs Swift (catch up here if you missed out) a whole slew of celebrities have come out for Team Kim or Team Swift.

First off the bat was Selena Gomez who immediately got dragged for not addressing the issues she says other’s should address.

There are more important things to talk about… Why can't people use their voice for something that fucking matters?

@selenagomez you literally have not used your voice, or lack thereof, to speak on any of the tragedies in the world within the past 4 months

Then Chloë Grace Moretz got involved with a similar sentiment:

Stop wasting your voice on something so petulant and unimportant

Kim has used her considerable clout to speak out about a bunch of issues over the past year including #blacklivesmatter so perhaps this wasn’t the best approach.

Khloé Kardashian has stepped up to the plate, defending her sister with a perhaps ill-advised tweet. Note: the censorship is ours. 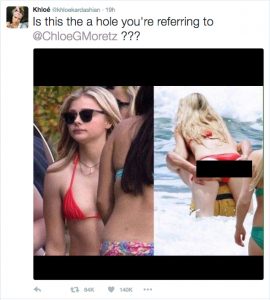 Chloë fired back to say that the second photo is not her, and offered proof with shots from her movie, Bad Neighbours 2.

@khloekardashian fact check: first photo is me filming my movie Neighbors 2, the second photo is some girl who was wrongfully photographed

Ruby Rose has then lashed out at Khloé for bullying:

@ChloeGMoretz @0hbubbl3s @khloekardashian Yo Khloe I thought you were rad when I met you but this is awful and this is a 19 year old girl.

Khloé then defended her actions saying that she is simply trying to protect her family.

I’m the last person to bully but have an animal instinct to protect and defend my family.

Despite this having blown up, we think that this drama is not quite done yet.