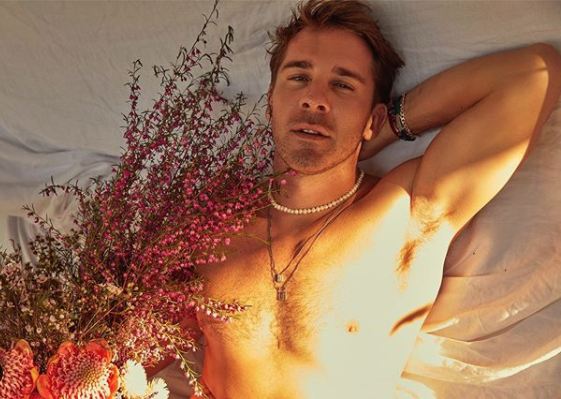 Australian actor Hugh Sheridan said he felt obliged to address his sexuality for LGBTQ+ youth who are struggling to “figure themselves out”, in an essay for Stellar Magazine.

In a powerful essay and the most honest interview he has yet given, actor Hugh Sheridan is for the first time openly addressing why he never engaged with the media despite years of rumours and gossip about his personal life and sexuality – until now. "Everything happens for a reason. Never judge someone unless you've walked in their shoes," says Sheridan, who writes and talks about childhood bullying, being encouraged by early mentors – some of them gay – to keep any same-sex relationships under wraps for the sake of his career and finally having the self-confidence to tell his story without shame. Read it today inside The Sunday Telegraph (NSW), Sunday Herald Sun (Victoria), The Sunday Mail (Queensland), Sunday Mail (SA) and Sunday Tasmanian (Tasmania). Photography: @brewbevanphoto Styling: @irenetsolakas Interview: @karlie_rutherford Words: @hugh_sheridan

The 35-year-old star revealed he has had relationships with both men and women. Although he doesn’t feel the need to label his sexuality, he wanted to publicly talk about it so that his openness can possibly help other generations of closeted queer people live their lives.

How can anyone know who someone else is? This wasn’t foreign to me, so I thanked him, and assured him I was indeed happily working it out for myself. And even if I ever did find somewhere for myself that fit, I still wouldn’t tell him, as his personal business was none of mine nor mine his. But I also realised that if I never addressed these issues, if I maintained a silent protest, people would always think I had something to hide, or denying others that expression. In many ways I wish I didn’t even have to write this, but I feel a responsibility to others who might come after me. By sharing my story now, becoming more transparent maybe others who are private might be given a break? We might live and let them live as they wish. I believe labels are for clothes not for people. Even if a few people read this and relate then sharing this was worth the world to me. My advice to anyone still figuring it all out is not to worry, right where you are is enough. You don't need to know all the answers today, or even tomorrow. I may not know exactly who I am until I'm 80, that's totally fine with me. I had zero self confidence in my twenties and I hated what I saw from an early age. It’s not too late to go back and give love to yourself and try letting others know that they too are perfect just as they are. Today I declare “I am a human”, just like you, trying my best to navigate, grow and live through an ever changing world. I recognize more now than ever our pressing need to celebrate our common humanity, before we are male and female we are already human, born in a state of being. From this vantage point we can accept we are all the same yet honour our differences be it; ethnicity, gender, job, sexuality, religion, financial status. None of us are the same but I see more togetherness than separation when I look at you. Humans shift and evolve as the world around us does, that’s part of what makes us special. If there’s one thing I’ve learnt in 2020 it’s to relinquish control, embrace the unknown. It can all be confusing, especially when we’re taught we need to know who we are, but life happens, hearts break, we grow and change again.

In the essay, Sheridan said he was assumed to be gay by his peers, which he felt was a “misplaced” label because at the time he was only attracted to the opposite sex. After he moved to Sydney to attend NIDA, he met a guy who he “connected with emotionally, mentally and physically … I was over the moon, I could finally be what people always wanted me to be” he explained.

“he told everyone he was gay, but I was told that if I was anything but straight I’d never find work … the two mentors who told me this were openly gay themselves; they were earnestly trying to protect me and did indeed have my best interests at heart. That was just the reality”

During the first few months of lockdown I really made my temporary home my home. This series of photos will always be special to me as this was where I penned my first screenplay. A mate @harryhayes came and photographed me in Bronte so I’d remember what my bedroom looked like when I wrote my first movie: the dance.

Although he advocated in “silence” for LGBTQ+ equality for a number of years, Sheridan is now speaking out about his sexuality. He explained “by sharing my story now, and becoming more transparent, maybe I can help to give others who are private a break. We might live and let them live as they wish. I believe labels are for clothes, not for people.”

“people will read this and say, ‘He’s not coming out. He’s bisexual. He’s asexual, He’s non-binary, He’s queer Or He’s fluid.’ These words that didn’t exist when I was younger and maybe if they had, they would have helped me.”

He said Stellar lockdown gave him a chance to reflect. “I’ve never felt I really knew who I was and I didn’t like the sounds of the labels that people were giving me so I decided to say nothing. But lockdown gave me time to reflect and it occurred to me that no-one ever sticks up for people who don’t pick a label,” he said.

“the fact that these labels keep popping up indicate there must be a lot more people out there who feel how I feel – like the words still don’t fit … I want to be that person and speak on behalf of people who feel like they’re in that grey area.”

It’s good to see that we live in an era where people like Hugh can be honest with their fans and live their most authentic lives. Becoming a voice for people like them who may be struggling in this “grey area”. Sheridan, will appear in Back to the Rafters, a reboot of the beloved TV drama packed to the Rafters. The show will stream on Amazon Prime Video next year.